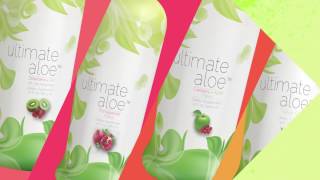 Why Ultimate Aloe Juice is the best!

The aloe plant has been used to promote health for thousands of years. Ultimate Aloe Juice is a source of over 200 nutrients, enzymes, vitamins and minerals, including 13 of the 17 essential minerals needed for good nutrition. Because the typical diet consists of many foods hard to digest, maintaining a healthy digestive tract is important to the overall health of the body. This is true because a healthy digestive tract ensures proper absorption of nutrients from the food we eat.

Ultimate Aloe Juice has the IASC (International Aloe Science Council) seal that certifies the aloe content and purity. The aloe vera in Ultimate Aloe Juice is harvested and processed according to sanitary manufacturing practices that use specific time and temperature guidelines. This preserves the natural properties of the aloe vera plant so you receive the maximum benefits of the product.

Ultimate Aloe Juice is virtually free of undesirable components such as aloin and other anthraquinones (aloin: one ppm or less) confirmed by an independent university laboratory. It is necessary to avoid components such as aloin and anthraquinones because of their history of harsh side effects. Ultimate Aloe Juice’s quality is analyzed for chemical and physical characteristics and in-vitro assays for monitoring biological activity. Our manufacturer is the only supplier with a full range of biological, chemical and medicinal research and development capabilities.

The video below is designed for institutional purposes only, where its standards were created under USA regulations, therefore, some products may not be available or information may not be in alignment with your country and/or region. These statements have not been evaluated by the Food and Drug Administration (FDA) in USA. This product is not intended to diagnose, treat, cure or prevent any disease. You should consult your physician before beginning this or any other weight-management program.

This product is sold with at least a 3 month shelf life remaining.

Aloe vera Leaf (ActiveAloe)
Chemical analysis shows that aloe vera contains vitamins, minerals, triglycerides, carbohydrates, amino acids, enzymes and water. The vitamins found in aloe include B1, B2, B3 and B12, choline, folic acid, vitamin C and beta-carotene (a precursor to Vitamin A), which are all vital to optimal health and the formation of certain key enzymes. Aloe has been shown to contain many beneficial minerals needed for good nutrition. Minerals found in aloe include calcium, magnesium, potassium, chloride, iron, zinc, manganese, copper, chromium, sulfur, boron, silicon, phosphorus, and sodium. These minerals are vital in the growth process and essential for the function of all body systems. Aloe vera also contains necessary triglycerides including fats, oil and waxes. They carry the fat-soluble vitamins and supply the fatty acids essential for growth and general health of the body. Aloe vera contains 20 of the 22 amino acids needed for good nutrition; nine of these are essential and must be supplied from an outside source because the body cannot manufacture its own. Aloe has been shown to contain all of the essential nine amino acids. Aloe vera also contains critical enzymes that trigger the chemical reaction of vitamins, minerals and hormones for normal functioning of the body.

What is ActiveAloe?
Ultimate Aloe Juice contains the ingredient ActiveAloe, which is protected by a patented process that actually enhances aloe vera’s biological activity by isolating the polysaccharide fraction from the plant. This is important because the healthful benefits of aloe come from polysaccharides of a certain size. ActiveAloe is produced under ultra-sanitary condition; employees go through sanitation every time work area entered and the entire area undergoes wash down each night. It contains a novel proprietary method enabling the dehydration of aloe while maintaining flavour, colour and nutrients.

I noticed the IASC Seal on the Ultimate Aloe Juice bottles. What is it and what does it mean for me?
The seal is a certificate from the International Aloe Science Council (IASC). It demonstrates that the quality of aloe in Ultimate Aloe Juice has been validated and certified by an independent group of professionals. Market America has made a strong commitment to sell a standardized, well-defined, thoroughly tested product that meets the rigid standards of the Council.

Is Ultimate Aloe Juice safe for diabetics?
Anyone under medical treatment should consult a physician before taking any natural products.

Is Ultimate Aloe Juice cold-processed?
No, it is pasteurized. Pasteurization is the process by which the product eliminates bacteria to prevent contamination and spoilage. In fact, several studies show that the active ingredients can be enhanced by heating.

Why is caramel added to the regular (Natural) flavour?
The caramel is added to the product to obtain the dark brownish colour.

Why does the taste vary?
The taste will vary from lot to lot due to the seasonal time of harvest. The sun and the amount of water the plants receive are directly responsible for the ripeness of the plants. Just as with any vegetable, you will have a different taste depending upon the growing process. Please enjoy the great taste of our Ultimate Aloe Juice!

The label on the bottles includes something called malic acid. Why is that added?
The malic acid was added to further promote freshness and aid in balancing the pH level.

What are the steps in harvesting the natural aloe in Ultimate Aloe Juice?
Aloe is harvested by pulling back on the green leaf and cutting at the white base. Approximately three of the outermost mature leaves are cut from each plant. Leaves are gathered in boxes that are transported immediately to the production facility. Back at the building, production employees feed incoming harvested leaves into the primary washer located just outside the production room. The production room has a stainless steel conveyor system that quickly moves harvested leaves from the primary wash tank outside through a small opening in the wall into the room. The conveyors propel leaves to the mechanical leaf washer, and then to the cutting area. The production room is kept in an ultra-sanitary state, even when not in use. Employees are required to go through a process of sanitation every time they enter the room and the entire area is thoroughly cleaned after each production run. It is important to use aloe vera that has been processed in a manner to stabilize the aloe and stop the enzymes from continuing to break down the polysaccharides. This normally has to be done in the first four to six hours after severing the leaf from the mother plant. Ultimate Aloe Juice is properly harvested and manufactured to ensure the body receives maximum benefits.

Why is the aloin removed from the aloe?
Fresh aloe vera leaf contains aloin, a powerful laxative, which must be eliminated from the juice if it is to be used safely as an ingredient in a health drink. Activaloe® uses a patented process to remove aloin and concentrate the active polysaccharide fraction.

What is the history of aloe vera use in promoting health?
The idea that aloe vera can promote skin health is as old as the Pyramids. It is believed to have originated in the warm, dry climates of northern Africa. It has been found referenced in ancient hieroglyphics, which indicate it was a product that was traded between the Egyptians and the Sumerians as many as 6,000 years ago. It was first described in the Ebers Papyrus, an Egyptian medical book written between 1553-50 B.C.E. The aloe has been used as a health agent or cosmetic ingredient for thousands of years in promoting normal wound healing, healthy digestion and healthy skin. Persian and Indian healers have used the soothing powers of aloe vera for centuries. In addition, both Chinese and Japanese civilizations have taken advantage of aloe vera’s beneficial properties. Greeks and Romans also used aloe vera in supporting health as early as the first century. Ancient Greeks obtained it from the island of Socotra in the Indian Ocean. In the 10th century C.E., its soothing powers were recommended to the British king Alfred the Great by the Patriarch of Jerusalem. Muslims who have made the pilgrimage to Mecca are entitled to hang an aloe plant over their doors as a talisman against evil. If you look at the history of aloe as a topical application or cosmetic ingredient, there are three types of evidence that have been used to support its value, including testimonials, scientific research and chemical analysis. Reports show that as early as the 1930s, the gel was used to successful sooth and promote the normal healing of X-ray and radium burns. Studies were also done on its effectiveness for thermal burns. Many individuals apply the gel to minor cuts, abrasions and burns. Aloe vera products enjoy growing public interest. Strong examination of aloe vera continues within the medical community. Most of the modern research has focused on aloe vera’s ability to promote skin health and support normal healing. These outcomes are supported by many modern clinical studies conducted by medical professionals. The juice of the plant continues to gain in popularity as an effective health drink. Hundreds of chemical reports show that aloe vera contains vitamins, minerals, amino acids, enzymes and a large number of healthy compounds.

This is an excellent product. I use it with my daily water intake. Not a fan of water but flavoured with a bit of aloe juice it is a perfect combo. Kiwi is the best.

I started using this to help with constipation. It has done the trick and has helped my digestion. So pleased

This product is amazing my son and I uses it daily it really does a body good.

This product lives up to its name.

Growing up we had aloe plants and used to use them for cuts burns and internal healing, but the taste and after effects was not the best.

Taking aloe this way, is a breeze and all the good and none of the bad

Link to this page and tell all your friends!